Intestinal bacteria play a key role in causing and preventing many diseases. Some experts suggest specific bacteria can prevent all disease known. A new study has once again suggested they could also reduce cancer risk. 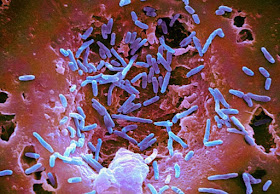 There are over 400 species of bacteria in your belly right now that can be the key to health or disease.
Health care of the future may include personalized diagnosis of an individual's "microbiome" to determine what probiotics are needed to provide balance and prevent disease.
A role for gut microbes in gastrointestinal function has been well documented since researchers first described differences in the fecal bacteria of people with specific disease including cancer.
According to the paper, microbiota might delay the onset of cancer, withprobiotic supplementation playing a role.
The genomes of the bacteria and viruses of the human gut alone arethought to encode 3.3 million genes.
Data shows the gut microbiome influences many bodily processes and systems however the exact implications of dysbiosis are yet to be fully explained.
The microbiota has been shown to influence energy metabolism, beta-oxidation of lipids and bile acid.
In addition, its role in glutamine and tryptophan metabolism, as well as oxidative stress and immune response metabolites has been well documented.
Recent studies have largely focused on the regulatory and signalling pathways that are directly affected by the microbiome.
However, studies that directly examine the metabolic consequences of gut microbiome alterations are few and far between.
The Science Part
The Lactobacillus strain has many commercial applications with its cultures found in yogurt.
Researchers from the University of California, Los Angeles (UCLA) began by isolating the bacterium Lactobacillus johnsonii 456, which is abundant in beneficial bacteria. This Lactobacillus strain has many commercial applications with its cultures found in yogurt, kefir, kombucha and sauerkraut.
Next, the team used mice that were bred with an ATM gene mutation. This made them susceptible to ataxia telangiectasia (AT), a neurological disorder associated with a high incidence of leukaemia, lymphomas and other cancers.
The mice were then placed into one of two groups. One group were given only anti-inflammatory bacteria and the other received a mix of inflammatory and anti-inflammatory microbes that normally co-exist in the intestines.
In an analysis of the mice's urine and faeces, the scientists found that mice receiving only the beneficial microbiota produced metabolites that are known to prevent cancer.
Those mice also had more efficient fat and oxidative metabolism, which the researchers believe might also lower the risk for cancer.
The mice receiving only the beneficial bacteria formed lymphomas half as quickly as other mice. These mice also lived four times longer and had less DNA damage and inflammation.
Gut Instinct
"Together, these findings lend credence to the notion that manipulating microbial composition could be used as an effective strategy to prevent or alleviate cancer susceptibility," the researchers write.
In the future, it is our hope that the use of probiotics-containing [supplements] would be a potential chemopreventive for normal humans, while the same type of microbiota would decrease tumour incidence in cancer susceptible populations."
Despite efforts in the field of AT research, the mechanisms that microbiota follow that cause lymphoma formation remain difficult to define.
It is known that ATM regulates the protective cellular response to oxidative stress by sensing double-stranded DNA breaks, thus inhibitingcell cycle progression.
As much as intestinal microbiota can exert a protective effect, its makeup can influence the response of cancer to therapies.
As much as intestinal microbiota can exert a protective effect, its makeup can induce cancer development , for example Helicobacter pylori, inducing gastric cancer and lymphoma in WT mice and humans, as well as potentially influencing the response of cancer to therapies.
ATM-deficient mice have provided a suitable subject to investigate the progression of certain cancers. These subjects have been the focus of previous studies that demonstrated these mice developed lymphomasand died between 2 and 5 months of age.
In attempting to explain how the metabolic changes in mice were as a result of their gut microbiome composition, the UCLA team looked to the analysis of urine and faecal sample results.
The data suggested that certain microbiota caused a metabolic shift towards the upregulation of metabolites including kyneurenic acid, methyladenine and 3-methybutyrolactone.
These metabolites could weaken cancer-promoting signalling pathways, and have been previously shown protective abilities from certain cancer types, independent of the subjectâ€™s genetic make-up.
6 SURPRISING FACTS ABOUT MICROBES IN YOUR GUT1. What's in Your Gut May Affect the Size of Your Gut
Need to lose weight? Why not try changing your gut bacteria? New research published in the journal Science suggests that the microbes in your gut may play a role in obesity. A probiotic supplement of exceptional quality and effectiveness that contains at least 10 billion CPU (colony-forming units) of several human strains of "friendly" intestinal micro-flora can actively prevent weight gain.
2. Probiotics May Treat Anxiety and Depression
Scientists have been exploring the connection between gut bacteria and chemicals in the brain for years. New research adds more weight to the theory that researchers call "the microbiome--gut--brain axis."

Research published in Proceedings of the National Academy of Science shows that mice fed the bacterium Lactobacillus rhamnosusshowed fewer symptoms of anxiety and depression. Researchers theorize that this is because L. rhamnosus acts on the central gamma-aminobutyric acid (GABA) system, which helps regulate emotional behavior.
L. rhamnosus, which is available as a commercial probiotic supplement, has also been linked to the prevention of diarrhea, atopic dermatitis, and respiratory tract infections.
3. The More Bacteria the Better
While bacteria on the outside of your body can cause serious infections, the bacteria inside your body can protect against it. Studies have shown that animals without gut bacteria are more susceptible to serious infections.

Bacteria found naturally inside your gut have a protective barrier effect against other living organisms that enter your body. They help the body prevent harmful bacteria from rapidly growing in your stomach, which could spell disaster for your bowels.
To do this, they develop a give-and-take relationship with your body.
"The host actively provides a nutrient that the bacterium needs, and the bacterium actively indicates how much it needs to the host," according to research published in The Lancet.
4. Gut Bacteria Pass from Mother to Child in Breast Milk
It's common knowledge that a mother's milk can help beef up a baby's immune system. New research indicates that the protective effects of gut bacteria can be transferred from mother to baby during breastfeeding.

Work published in Environmental Microbiology shows that important gut bacteria travels from mother to child through breast milk to colonize a child's own gut, helping his or her immune system to mature.
5. Lack of Gut Diversity Is Linked to Allergies
Too few bacteria in the gut can throw the immune system off balance and make it go haywire with hay fever.

Researchers in Copenhagen reviewed the medical records and stool samples of 411 infants. They found that those who didn't have diverse colonies of gut bacteria were more likely to develop allergies.
But before you throw your gut bacteria a proliferation party, know that they aren't always beneficial.
6. Gut Bacteria Can Hurt Your Liver
Your liver gets 70 percent of its blood flow from your intestines, so it's natural they would share more than just oxygenated blood.

Italian researchers found that between 20 and 75 percent of patients with chronic fatty liver disease--the kind not associated with alcoholism--also had an overgrowth of gut bacteria. Some believe that the transfer of gut bacteria to the liver could be responsible for chronic liver disease.
How Do Probiotics Work

Probiotics work in many different ways by their production of antimicrobial substances (organic acids, hydrogen peroxide, and bacteriocins) that inhibit pathogen adhesion and degrade toxins produced by microbial invaders. Probiotics resist colonization by competing for binding sites as well as for nutrients with pathogens. In other words, they crowd out pathogens like candida and harmful E. Coli.
Probiotics secrete various proteins that stimulate the immune system both locally and throughout the body, boost intestinal brush border enzyme activity and increase secretory-IgA (a family of antibodies lining mucous membranes). Enzymes like lactase, sucrase, maltase, alpha-glucosidase, and alkaline phosphatase are enhanced by probiotics. Cholesterol and triglyceride blood levels are metabolized and lowered by healthy probiotic populations. Probiotics are able to resist translocation, defined as the passage of pathogens from the GI tract to extraintestinal sites such as the mesenteric lymph node (MLN), spleen, liver, kidneys, and blood.
Probiotic Sources

Cultured dairy products like yogurt, acidophilus milk, buttermilk, sour cream, cottage cheese and kefir are the best known food sources of friendly bacteria. Equally effective probiotic food sources include cultured/fermented vegetables (cabbage, turnips, eggplant, cucumbers, onions, squash, and carrots). Other, lesser known or used food sources of probiotics are sauerkraut and sourdough breads. Ideally, one could get a good supply of probiotics from one or more of these diverse foodstuffs. If dietary sources are not easily available, supplemental probiotic powders and capsules are good alternatives. Choose a brand that has at least 3 different strains of friendly bacteria and between 6 -- 15 billion live organisms.

This first appeared in Prevent Disease